In this issue, unwelcome activity in Holon. 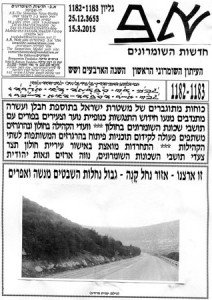 The activity of extreme Jewish religious groups is increasing considerably in Holon. The behaviour has the approval of a Municipality anxious to preserve the coalition, restricts the freedom of the residents of the Samaritan, Naveh Arazim and Neot Yehudit neighbourhoods. The three neighbourhood committees have cooperated,  taking legal steps to block the activity.

During the Purim Festival, Israeli police with reinforcements, ten volunteers and a police sapper prevented confrontations between youth gangs and the residents of the Samaritan neighbourhood in Holon. The committees of the Mount Gerizim and Holon communities have cooperated to promote joint development programmes in Mount Gerizim for the two communities.

Photograph by Amit Marchiv. This is Our Land: Kaneh Brook -the border between the tribes of Menashe and Ephraim in Samaria.

Note: A.B. – THe Samaritan News Magazine is a cultural platform for Israelite Samaritan Studies. It is bi-weekly, first published in December 1, 1969. Edited since its inception by the brothers Benyamim and Yefet Tsedaka.