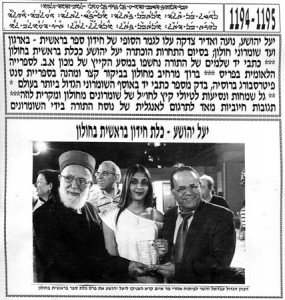 Yael Yehoshua, Noah Tsedaka and Adir Tsedaka stepped up to the final of the Quiz on the Book of Genesis.

At the end of the competition Genesis Quiz Winner Yael Yehoshua was given the traditional title Bride of the Book of Genesis, in Holon.

A complete manuscript of the Torah was revealed during the visit of A.B. Institute of Samaritan Studies to the Bibliothèque Nationale de France, in Paris. (The manuscript is securely stored in one of the BNF vaults).

A wave of happy occasions and summer trips abroad by Samaritans from Holon and Kiriat Luza.

A very positive response (4.5 out of 5 stars in Reviews) to the English translation of the Israelite Samaritan Version of the Torah.