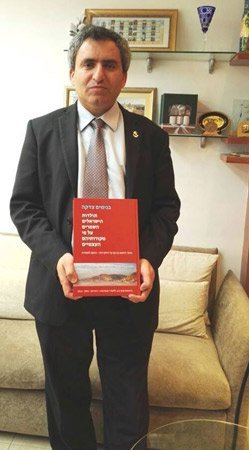 The author presented his new book to MK (Member of the Knesset) Zeev Elkin, Absorption Minister and Minister for Jerusalem Affairs and Heritage. They met in the Minister’s office in the Knesset to discuss development of the Israelite Samaritan site on the summit of Mount Gerizim. The site is managed by National Parks and Nature.

The meeting was coordinated and organised by the author’s brother, Yefet Ben Ratson Tsedaka. Yefet works tirelessly to strengthen the bond between the Israelite Samaritan community and the Israeli government.

The Minister thanked the author for the copy of The History of the Israelite  Keepers Based On Their Own Sources. The book, in modern Hebrew, is the author’s 107th publication since 1971, and the first in 2016.

Minister Elkin revealed that he has recently been researching Samaritan Studies. He is particularly interested in disbursing heritage budgets for extensive development of the Mount Gerizim site, with an emphasis on explaining the importance of the site from the Israelite Samaritan point of view.

In recent months the site on the summit of Mount Gerizim has seen considerable  development work, including the construction of a small auditorium for lectures. The aim is to attract domestic and foreign tourism to Mount Gerizim, which will also benefit the Israelite Samaritan community.

Visits to the site are free for community members. Other visitors pay a nominal entrance fee of NIS 23 for a single visitor, and NIS 19 per person for a group.

*Benny Tsedaka’s new book covers Samaritan history from the days of Joshua bin Nun (c.1355-1245 BCE) to 2015 CE. The History of the Israelite Keepers Based On Their Own Sources is available HERE or from the A.B. Institute of Samaritan Studies, in Holon and Mount Gerizim, overseas price: $200 including worldwide delivery.

The photo shows Minister Zeev Elkin with the new book.