Benny Tsedaka’s fourth major life project is a complete Israelite Samaritan Torah commentary in five volumes, each devoted to a book of the Pentateuch.

His first life project is the ongoing editing and publication of A.B. The Samaritan News, the bi-weekly Samaritan newspaper, soon to be published as 48 bound volumes 1970-2017 in hardcover. 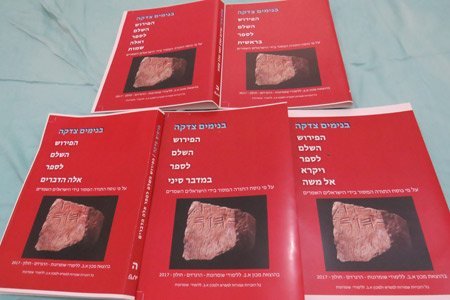 A Complete Commentary on the Torah is based on the Israelite Samaritan Version of the Torah, as it has been delivered for the past 125 generations, since it was originally written by Mooshee Ban ’Aamraam (Moses ben ‘Amram) the Prophet of all prophets.

Each hardcover volume of the Torah commentary relates to a book of the Israelite Samaritan version of the Pentateuch, and is divided into three sections:

(1) A complete commentary based on the rich wisdom of the Israelite Samaritan Sages, and the humble opinion of the commentator Benyamim Tsedaka. This part is written in Modern Hebrew.

(2) The original text in Ancient Hebrew.

(3) The original text in modern Aramaic script, with the commonly accepted chapter and verse numbers to make it easier for the reader to follow the commentary.

The price for the whole series of five books is $400 including delivery.

Orders for the whole set of five books can be made through the PayPal button on this page, via the A.B Institute’s representative Greenwave Promotions, authorised by the Institute to send a receipt for each purchase. These books are available from June 2017. Copies can be pre-ordered via the button below.

A Complete Commentary on the Torah