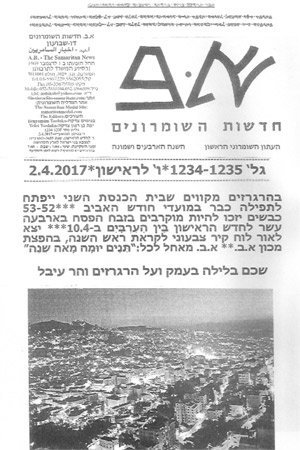 Article from the English Section on 2 April 2017

Very little is known about the history and nature of the Samaritan version of the Pentateuch (SP). However, what is becoming increasingly clear is the importance of this textual tradition to the study and textual criticism of the Pentateuch.

Previously, there has been much speculation about the value of the SP, however, this former assumption is slowly giving way in biblical studies. Indeed, this review, despite coming nearly four years after the publication of Tsedaka’s volume, is intentionally timed in conjunction with the greatly needed and much anticipated inaugural volume (Leviticus) of the critical edition of the SP, which is to be published by DeGruyter in August 2017. The more this textual tradition is studied, the more it is being valued. The need for further study is all too evident.

Interestingly, not until 2013 was an English translation available for a wide audience to enjoy and appreciate the importance of this text. But thanks to the pioneering work of Benyamim Tsedaka scholars in various fields and interested individuals around the globe can both study and enjoy the SP. However, this volume is important for more than the translation alone. For it contains a forward by Emanuel Tov, a short essay by James Charlesworth, and an additional introductory essay by Tsedaka. Tov discusses the nature of the SP generally by comparing it to the Masoretic text, with which the SP often disagrees, and with the LXX and Qumran texts, with which the SP often agrees. Tov concludes that the SP is indeed valuable as it generally witnesses to a very ancient text tradition. Charlesworth, in his brief essay addresses the basic question: What is the Samaritan Pentateuch. He contrasts older and more recent scholarly attitudes surrounding the SP.

In his own introduction, Tsedaka first offers an introductory overview of previous scholarship on the SP. To readers who are new to the SP this service will prove invaluable. Students and scholars will find the footnotes in this introduction to be a great resource as well…

The full text of Stephen Campbell’s article is in A.B Samaritan News, 2 April 2017
See also this page for more about The Israelite Samaritan Version of the Torah