WHY DOES THE LIST OF JOURNEYS OF THE SONS OF ISRAEL NOT MENTION THE MOUNT SINAI ASSEMBLY?

First – Get Out of Egypt

Main Objective – Get To Mount Sinai

The great prophet Moses first met with the One who assigned him the task of releasing the Sons of Israel from Egypt at the Mountain of Chorev, also called Mount Sinai or the Mountain of the Almighty. The mountain stands in the heart of the Sinai Desert, just as the Torah describes it. Moses is the “Angel” brought by the Almighty. He is the messenger who received the first of many signs relating to his commission and to the Exodus. 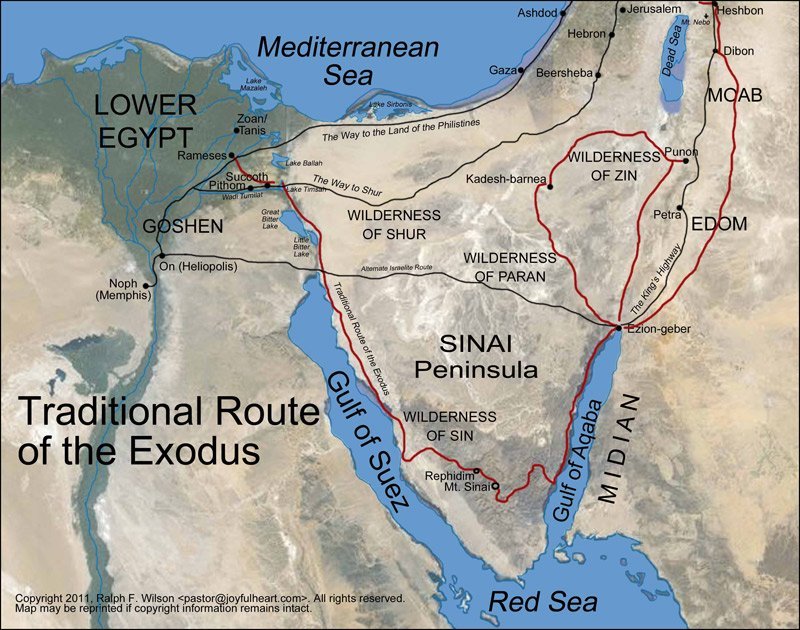 First – Get Out of Egypt

In order to encourage the hesitant Moses to accept the commission the Almighty said,

. . . Certainly I will be with you. And this shall be the sign to you that it is I who have sent you, when you will bring the people out of Missrem (Egypt), you shall worship Eloowwem at this Mountain. [Exodus 3:12]

Note that this is the first sign that leads to the completion of the first part of the mission. Moses’s staff turning into a serpent, and water in the ground turning into blood, these occur later. The aim is to restore liberty after 215 years of slavery in Egypt. From the day the brothers of Joseph told Pharaoh: “. . . Your slaves have been keepers of cattle . . .” [Genesis 46:34] until the day Moses led their successors from slavery to freedom, following the Pillar of Fire and the Pillar of Cloud, towards the Mountain of the Almighty, Mount Sinai.

Main Objective – Get To Mount Sinai

Moses aimed to bring the people to Mount Sinai, where they would worship the Almighty. This long-term objective gave Moses the resilience to see through the negotiations with Pharaoh. It also enabled him to see out the plagues that befell Pharaoh, his slaves and the Egyptians. He repeatedly expressed the Almighty’s aims, for example

. . . Let My people go, and he will serve Me. [Exodus 9:1]
And Mooshe said, “You must also let us have sacrifices and burnt-offerings, that we may sacrifice to Shehmaa our Eloowwem”. [Exodus 10:25]

The first part of his commission was a prelude to the main aim – to get to Mount Sinai. The transition took the Hebrews from physical slavery – building barns and cities for Pharaoh, under duress – to spiritual servitude. Their spiritual burden came down on them from the top of Mount Sinai.
Back to Contents

It seems likely that the Hebrews only knew full freedom for seven weeks. Seven weeks separated the Exodus and receiving the Torah on Mount Sinai. The Hebrews received the Torah and the Commandments in the Sinai Covenant. They said to Moses

It was as if they said, “We take upon ourselves the burden of a new slavery. Not a physical slavery, rather a spiritual servitude, that includes fulfilling all the commandments of the Almighty with no resistance”. The spiritual servitude would last for all time.

The people journeyed for seven weeks, from the Sea of Reeds to Mount Sinai. Along the way they experienced events intended to strengthen them for the great day of the Covenant. On that day they would receive the Commandments and the burden of their new spirituality. The people saw the sea draw apart, exposing the seabed for them to cross. They passed from the shore of physical slavery to the shore of liberty. They saw the pursuing Egyptians drowning in the sea. When thirsty, they drank to satiation. Hunger afflicted them, and they ate until satisfied. And the Almighty had given them the Sabbath for rest.
Back to Contents

They fought ‘Amalek and won. However, in this first test of their power they suffered casualties caused by physical contact with the ‘Amalekite enemy. Previously, they had looked on passively from the side. For example, they had watched at the Reed Sea, and also during the war of the Almighty against the idols of Egypt. Moreover, they gained an organised legal system based on justice, on the eve of the most momentous event in their history – the Assembly of Receiving the Torah on Mount Sinai. They heard the Ten Commandments from the mouth of the Almighty, and heard the voice of Moses as they fell down on their faces, to listen with rapt attention to the words of the Almighty.
Back to Contents

When we look at the Ten Commandments, we find they contain everything. They describe the unity of the Almighty and define our relation to Him. The Commandments include the elimination of idol-worship. They also contain the instruction to observe the Sabbath, to keep it and consecrate it. The Commandments contain the deed of the Creation. They contain the principles of justice between a man and his neighbour: do not murder him, do not commit adultery with his wife, do not steal his property, and do not covet anything that belongs to him, neither house, wife, field, male or female slaves, bull, ass, nor anything that belongs to him.

If a person fulfils these commandments, they thereby establish respect with their Creator and with their neighbour. Then they have reached the desired aim of worship of the Almighty. Finally, exchange one temporary place of worship, Mount Sinai, for a perpetual place for worship of the eternal Almighty. Then erect an altar to the Almighty on Mount Gerizim. This commandment completes the counting from the first commandment to the tenth.
Back to Contents

Surprisingly, the description of the journeys of the Sons of Israel in the Desert of Sinai barely mentions the Sinai Assembly. The description assigns merely a few words to the Assembly

In other words, the central event of the Sinai Assembly, the other events that accompanied it: the visions and voices, the words of the Sinai Covenant, the Ten Commandments, the making and destruction of the golden calf, giving the Two Tablets of the Covenant again to replace the Tablets that Moses broke – these events, spanning over 120 days, do not feature.

But the Sinai Assembly itself, and the urge to reach it, are many times more important than the Exodus. Yet the book of Exodus relates their journey through the desert, their thirst for water, their desire to eat meat, the death of Aaron, and the fact that the Canaanite king of ‘Arad heard about the coming of the Sons of Israel.

So how did it come about that the central event that made the Sons of Israel the chosen people was never mentioned among the journeys in the Sinai Desert until they approached the Land of Canaan?

The reasonable answer must be that, if the greatest event is not mentioned in the list of journeys at the end of the Book of Numbers, then the list given in Numbers, despite the many details it provides of stations and places, is simply incomplete.