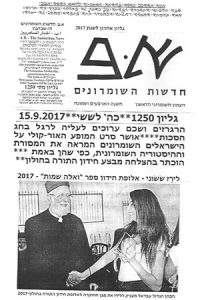 Article from the English Section on 15 September 2017

Israeli archaeologist Nehemia Zuri (1967: 149-167) noted the burning of incense at the Jewish synagogue in Beit Shean, (page 3 of 6 Original Research Open Access), which was established in the late 4th or early 5th century CE and remained standing until at least 624 CE. One of the finds uncovered at the synagogue was a bronze incense burner similar to examples found in Latakia, Syria (Ross 1965: 42-45). This incense burner is constructed of two pieces. The bottom piece is a type of perforated box with four intricate legs, while the upper piece is a cone-shaped cover. Finding the incense burner in a synagogue in the Land of Israel appears to indicate that here, specifically, attempts had been made to preserve parts of the demolished Temple, which had served in practice as the spiritual centre of all the diaspora in the consciousness and memory of the people.

The material find points to the use of incense in synagogues, but it does not give any indication as to when the incense was burned or at what period it became integrated in ancient Jewish liturgy.

Israeli archaeologist Yitzhak Magen (2002a:253-257; 2002b:432) posits that the vessel probably belonged to the local synagogue, indicating that the Samaritans had burned incense in the synagogue. In the Samaritan version of the Torah, burning incense was associated with the Temple and not with the synagogue [Exodus 30:33-38].

In any case, this practice found its way into the Samaritan place of prayer, apparently after the destruction of the Samaritan temple on Mount Gerizim (see below). This temple was built by Sanballat II in the 4th century BCE and was destroyed in 112 or 111 BCE by John Hyrcanus (c. 164-104 BCE).

Established knowledge of Samaritan synagogues exists only from around the mid-4th century (Safrai 1977:90). Hence, it is hard to know when exactly Samaritan synagogues first originated and when incense was first used in them as part of the rituals mentioned in the Torah.

Burning incense remains a current practice in Samaritan synagogues. The Samaritans burn incense in the synagogue every Sabbath Eve, before the Sabbath, since it is forbidden to light a fire on the Sabbath (Ha-Cohen 2017). Incense is also burned on festival days.

According to Menashe Tsedaka (2009), during the morning prayers on the Days of Forgiveness (selichot), between the Festival of the Seventh Month (the equivalent of the Jewish New Year) and the Day of Atonement, the priest who leads the prayers burns incense in a unique vessel called a Mabkhara (the word derives from Arabic). He passes among the congregants and atones for them, as it is written:

And the priest shall make atonement for all the congregation of the sons of Yishraael; and they will be forgiven, for it was an error, and they have brought their sacrifices, an offering by fire to Shehmaa, and their sin offering before Shehmaa, for their error” [Numbers 15:25].

Hence, both the Jewish and Samaritan faith had a similar process of burning incense.

Published in A.B The Samaritan News on 15 September 2017