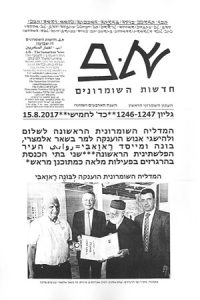 Extract from the English Section on 15 August 2017

Language and Script Through the Generations

During the period of Greek rule in the Land of Israel, Israelite Samaritans spoke Greek. Greek inscriptions and manuscripts written by the Samaritans remain to this day. It was also the language spoken in the Land of Israel during the rule of the pagan Romans. Between 1983 and 2008 over 500 inscriptions were discovered on the top of Mount Gerizim. The inscriptions are engraved in stone, mostly in Aramaic script, with the rest in Ancient Hebrew and Greek. They date from the 6th century BCE to the 4th century CE.

The Cult Is Limited to Ancient Hebrew and Aramaic

Samaritan priests and elders permitted the integration of Aramaic into prayers, which were composed partly in Hebrew and partly in Aramaic. The Israelite Samaritans compose their poems in these two languages to this day.

The Israelite Samaritans wrote using the square form of Aramaic and in cursive characters, using 22 letters:

Since the 10th century two centres for the Samaritan community have developed in the Promised Land. Today, half of the community lives on Mount Gerizim near Nablus, and half in Holon, near Tel Aviv. For everyday use the latter speak modern Hebrew. On Mount Gerizim the Palestinian dialect of Arabic is in everyday use. Many also speak modern Hebrew, a natural consequence of the passage of time since the two communities were established.

Late Samaritan Hebrew: a linguistic analysis of its different types by Moshe Florentin