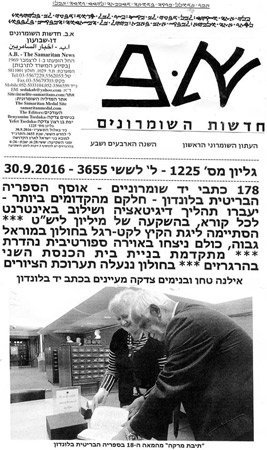 The 5-a-Side Football Summer League in Holon ended on a note of high enthusiasm. We can safely say that all the young men of the community who took part enjoyed a wonderful sporting experience.

Significant progress has been made towards building the second Israelite Samaritan synagogue on Mount Gerizim.

In The English Section

Nomia of Salona – A Samaritan Woman, or How I Found Out My Israelite Samaritan Origins

A.B. The Samaritan News Bi-Weekly Magazine.
Editors: The Brothers Benyamim Tsedaka and Yefet b. Ratson Tsedaka.
Established in Holon on 1 December 1969.
Now in its 46th year.