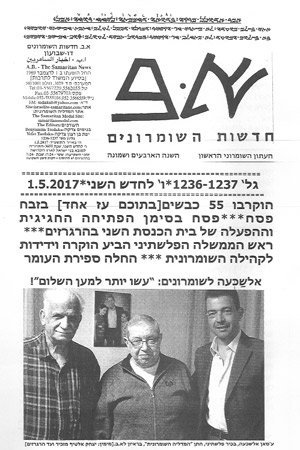 Samaritans Make Annual Sacrifice and Preserve a Way of Life

Although  there are now 802 Samaritans, their Passover sacrifice – set according to a calendar different from the mainstream Jewish one – draws an even bigger crowd.

The Samaritan community conducted its annual Passover sacrifice on Monday evening, 10 April 2017 under the leadership of the High Priest Abedel ben Asher, as 55 sheep were slaughtered on Mount Gerizim in an ancient ceremony that attracted more than 1000 spectators from around the world. There could be thousands more spectators but the Jews celebrated their own Passover on the same night. Very few of them came to Mount Gerizim.

High Priest Aabed-El Ben Asher was elevated to his position, which is reserved for the eldest member of the priestly family, following the death of High Priest Aaron ben Ab-Hisda at the age of 86. Ben Asher, 82, is the 132nd high priest in a line that the Samaritans claim stretches back to Aaron, brother of Moses.

“My task is to preserve our religion, lead prayers and ensure that my people love one another”, Ben Asher said in an interview at his home town of Kiryat Luza in the northern West Bank.

He noted that while the Samaritans have clashed in the past with their Palestininan neighbours in nearby Nablus, and moved out of the city during the first intifada, the two peoples have learned to live together. “There is no problem between us” he said, “we live next to each other and work together as well.”

The Samaritans, or Shamerim (in Hebrew: guardians of the law, trace their roots to the tribes of Menashe and Ephraim and practise a Torah-based religion similar to Judaism…

The full text of Andrew Esensten’s article can be found in A.B Samaritan News, 1 May 2017

See this page for more about the Passover sacrifice