A.B The Samaritan News is a periodical published in Modern Hebrew, Ancient Hebrew, Arabic and English. Brothers Benyamim and Yefet Tsedaka established the magazine in December 1969. Since that time they have published it every two weeks through a charity registered in Israel. The magazine features news and views of interest to the Israelite Samaritan community, as well as their friend and supporters. As well as publishing, Yefet and Benyamim also edit A.B The Samaritan News.

You can place an annual subscription to the magazine, including postage, securely through PayPal, below. (Choose your preferred currency. Greenwave Promotions Ltd process subscriptions on behalf of our charity).

Further items from the front pages of A.B The Samaritan News will appear as posts under NEWS

Dr Hasseb Shehadeh of the University of Helsinki reveals new details about Samaritan physician Tsedaka ben Mnajja (12-13th century CE). The physician is one of the most famous, and also one of the greatest commentators on the Torah.

For the first time since it closed 17 years ago, the Israelite Samaritan Synagogue in Nablus was reopened by High Priest ‘Abed El ben Asher, accompanied by leaders and dignitaries of the community. In addition,  Cantor Priest Maasleeh ben Bereta  directed a special prayer for the First Day of the 12th Month, The Head of Wonders. 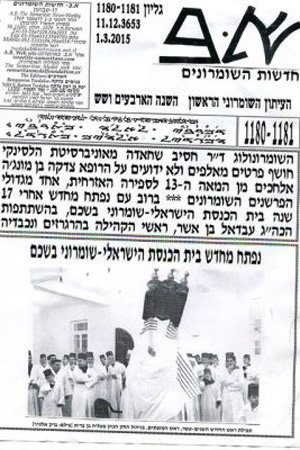 Since the last issue, the Tomb of Elazar ben Aaron, the first High Priest of the People of Israel in the Land of Israel was examined. The tomb lies in the village of ‘Awwarteh. The holy site is reported to be in good condition generally, though a political inscription was found in one of the visitors’ rooms.

Significantly, on the evening of Wednesday 18 February Samaritans will celebrate the renewal of their Synagogue in Nablus. The synagogue had lain abandoned since 1998. Israelite Samaritans from the neighbourhoods of both Mount Gerizim and Holon will take part. 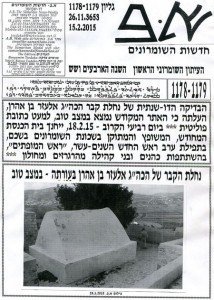 The front page photo shows the Tomb of Elazar in ‘Awwarteh, in generally good condition.

Significantly, the Samaritan Committee in Mount Gerizim has initiated the renovation of the Old Synagogue in Nablus. The synagogue has been abandoned since 1998.

There are now several Groups and Communities, both in Europe and the Americas seeking to live in the tradition of the Israelite Samaritans. 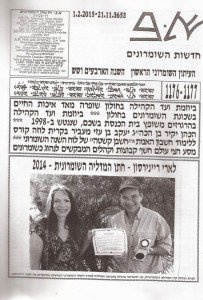 (Mrs. Juanita Berguson, Member of the Board of the Samaritan Medal Foundation, awarding the 2014 Medal to Mr Larry Rynearson. Larry edits the recommended website The Samaritan Update)