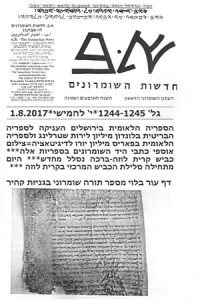 Article from the English Section on 1 August 2017

Does the move hint at something bigger?

The Israeli Defence Ministry’s Civil Administration linked one of the last remaining Samaritan communities to Israel’s water treatment system, with a special ceremony in the Palestinian Authority-controlled city of Shechem.

The Samaritans are an ancient people generally believed to be descendants of the northern kingdom of Israel, who remained in Samaria following the Assyrian conquest.

Census figures suggest the once-numerous Samaritans now number just 800, with almost half living on the edge of Shechem in Samaria. The remainder live in Holon, near Tel Aviv, inside the Green Line.

While most of the Samaritan community lived inside Shechem prior to the establishment of the State of Israel following the War of Independence, many Samaritans moved from Samaria, then occupied by Jordan, and into Israel.

This process accelerated in the late 1980s following the eruption of the First Intifada, when many Samaritans were forced to flee Shechem amidst growing hostility from local Muslims.

Today, the Samaritan community in Shechem lives in Kiryat Luza, a neighbourhood on the edge of Shechem, close to the Jewish community of Har Bracha. Kiryat Luza is under joint administration by Israel and the Palestinian Authority.

Kiryat Luza took one step towards greater integration with Israel when the local sewerage system was linked up with Har Bracha’s water treatment infrastructure.

The nearly four million shekel project (US$ 1 107 000) modernises the sewerage system of some 400 Samaritans in Kiryat Luza and links it to Israeli treatment plants. The project not only improves the quality of life for residents of Kiryat Luza, but also removes the threat of environmental damage posed by the leaking or overflowing of untreated sewage. In particular, raw sewage on Mount Gerizim posed a threat to underground aquifers.

This article continues in the 1 August 2017 issue of A.B The Samaritan News.