MINUTES OF THE SAMARITAN MEDAL FOUNDATION BOARD HELD ON 26 NOVEMBER 2012 AT NORTH POTOMAC, MARYLAND

The Board of Electors, chaired by Chairman Tsedaka, reported that it had unanimously reelected the Board of Directors for another annual term of service at a meeting the previous day.

The Directors unanimously approved the Minutes of the 2011 meeting, and entered them into the record.

Chairman Tsedaka opened the meeting with a welcome to all.  He stated that “Peace, Humanitarian, and Academic” activities are the three main purposes of the committee.

Appointments to Offices of the Foundation

Director Benko, as one of the founding members of the committee, then listed specific offices for each director to occupy for the following year (2013) as formulated by the Chairman with his complete support:
Director Berguson was unanimously elected to serve as ‘Apostle of Peace’.

Director Collier was unanimously elected to serve as ‘Director of the Nominations Committee’.

Director Jabara was unanimously elected to serve as ‘Director of the Information and Technology Committee’ which Paul Collier joined.

Director Jabara asked for clarification in fund raising on the website. Benko clarified that we are not constituted as a tax-deductible (including foundation) entity (we are an unincorporated association at this point) and that the financial and administrative burdens on seeking tax exempt status were beyond our means; and that if we find a funder who requires a 501c3 recipient we will seek, and readily should be able to find, a fiscal agent.

Director Benko was unanimously elected to serve as ‘Director of Treasury’.

Director Sullivan was unanimously reelected to serve as ‘Secretary General’.

Director Praver was unanimously elected to serve as ‘Director of Peace and Cultural Activities’.

Director Tsedaka was confirmed in a unanimous vote of confidence as ‘Chairman’ (for life).

Director Collier graciously offered to donate web design and development services equivalent in value to what he would charge his private clients $5,000, and would confer with Technology Committee Chairman Jabara on how best to proceed.

The nomination of Prince Karim Aga Khan IV was deferred until Chairman Tsedaka further inquires into the prospects of the Prince’s willingness to receive such recognition, but the Aga Khan’s role in preventing a civil war was duly noted.

Chairman Tsedaka suggested two recipients for 2013, for academic achievement: Professor James Purvis and Professor Steven Fine. Director Benko moved that both men be awarded a medal in 2012. Benko then amended his motion that the two men be awarded at the 2013 meeting. The motion was seconded, and passed by unanimous vote.

Director Benko spoke about Joanne King Herring, as portrayed in ‘Charlie Wilson’s War’ (book and movie). Herring was instrumental in initiating American support for the Mujahadeen in the Soviet Afghanistan invasion, leading to the end of the Cold War. Herring’s vision of Afghanistan rebuilding itself is worthy of great recognition. The board unanimously authorized that the medal be awarded with the certificate for 2012 to Joanne Herring.

Discussion then followed on the Family Reconciliation Project. Director Benko clarified that this project must be led by women. Benko stated that directors contact individuals who may be interested in participating, and if they are enthusiastic then it is imperative to establish an introduction and meeting between Sharon Sullivan and those individuals.

Director Berguson suggested that the text of the Family Reconciliation Project vision be edited: Rabbi Praver suggested, Benko moved, and Jabara seconded the motion to change ‘injustice’ to ‘humiliation’ in the text. The motion to adopt the project, as revised, was adopted without opposition. The official charter for this project, as adopted as an official project of the Foundation is attached. 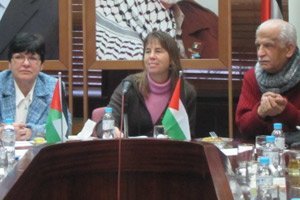 Director Benko then moved that Director Sullivan be recognized as the head of this project. It was unanimously approved by voice vote. Discussion followed in identifying ways and means to raise operating capital for the Family Reconciliation Project, including providing executive level compensation for Director Sullivan in her role as project director (and not as member of the Board of Directors). It was decided that the Information and Technology Committee would research an Indiegogo campaign in greater detail and that each Director was encouraged to seek funding for this project and for the Foundation’s other activities.

Director Benko then moved that Director Sullivan be awarded a Samaritan Medal of Peace. Director Jabara seconded the motion, which followed with unanimous voice vote. Chairman Tsedaka offered Director Sullivan a benediction of blessing in Ancient Hebrew. Other board members offered their benedictions as well.

Sharon (Photo: centre) expressed her heartfelt desire to head the Family Reconciliation Project, and offered thanks for the medal and benedictions.

Director Jabara asked that the pictures and biographies be sent to him before December 30, 2012.

Chairman Tsedaka moved to adjourn the meeting, Director Sullivan seconded the motion, which was followed with the unanimous agreement of all Directors.

The 2012 Annual Meeting of the Samaritan Medal Foundation was officially adjourned at 3 p.m