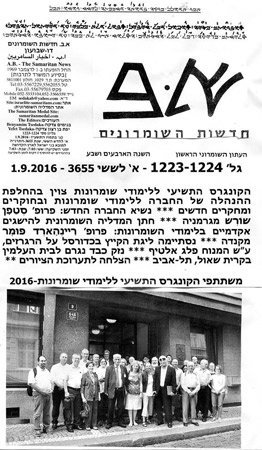 (Photo: Delegates at the International Congress of Samaritan Studies, Prague)

The Society’s new President is Professor Stefan Schorch from Germany.

The Mount Gerizim Basketball League has concluded a successful season with a tribute to the late Peleg Altif.

The Samaritan Cemetary in Kiryat Shaul has suffered damage. However, we understand that the damage does not extended to the graves and tombs themselves.

In The English Section

Benny Tsedaka lectures about the Israelite Samaritans in Bath, England, at an event organised by West of England Friends of Israel.

Israelite Samaritan Synagogue in the Amazon – The First in Brazil

Last night my friend Yiftah (Carlos) ben Abraahm Lima sent me a picture of the Israelite-Samaritan synagogue. With about 200 families, the community is similar in size to our Israelite Samaritan community in Israel. Significantly, their synagogue is the first in Brazil, and faces north-east towards Mount Gerizim. The community lives in the state of Amazonas, so their clock is seven hours behind Israel time.
The members greet each other with the words “Baarok Shehmaa”. On Friday and Saturday evening they use  “Shabbikon Taaben Yesi”. During Saturday nights they say: “Ashshehlam ‘Alikimma”. Of course, they keep Holidays and Shabbat and read the weekly Torah portion. The community also keeps the laws of purity and impurity. The people are happy and hospitable to each another, and wish peace to all members of our community. Their website has many pictures of community life in our country. They believe in Shehmaa, Moses, the holy Torah and Aargaareezem Bet El = House of El.

A further eight Israelite Samaritan communities exist in Brazil, all of them advanced in the process of building a synagogue. The second Brazilian synagogue will be completed soon.  This one is in the state of Para, so it is six hours behind Israel time. Brazil is home to approximately 8000-9000 individuals in Israelite Samaritan communities. The author maintains weekly contact with all nine community presidents.
In conclusion, there are 9 communities: 25% of the members are former Karaite or Rabbinical Jews, the remainder being former Christians. And not only in Brazil – smaller communities also exist in the USA, Sweden, Norway, Italy, Russia, India and Indonesia. On this next trip, my third visit since 2014, I hope to meet their leaders in November in Sao Paulo.