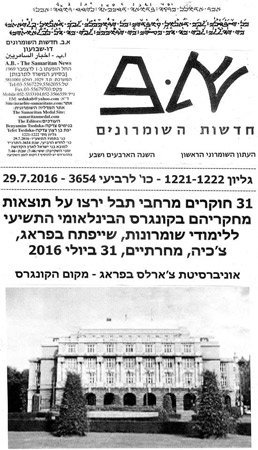 31 researchers from all over the world will gather at the Ninth International Congress of Samaritan Studies to speak about their research. The Congress starts on 31 July 2016 and continues until 5 August 2016.

The venue for the event is the Protestant Theological Faculty, Charles University in Prague.

The award of the Samaritan Medal (see below)

The Destruction of the Samaritan Temple by John Hyrcanus: a Reconsideration. J Bourgel

The Chroniclers’ Concept of Polemics Against the Samaritan YHWH Worshippers: a Fresh Attempt. B Hensel

On The Appearance of Samaritan Script. O Abadi

The Central State of Moses in Israelite Samaritan Literature through the Ages. B Tsedaka

The Samaritans During the Byzantine Period: Material Culture and Identity. E Baruch

How to Tell a Samaritan Synagogue from a Jewish Synagogue. R Pummer

Whose Neighbour? How Muslims, Christians, Jews, and Samaritans Live Together in Nablus. J Droeber

The Programme of the Ninth Intrernational Congress of Samaritan Studies, beginning at Charles University, Prague on 31 July 2016

The Samaritan Medal for Academic Achievements in Samaritan Studies is awarded to well-known scholar Professor Reinhard Pummer, University of Ottawa, Canada. The award will take place at 18:00, on the opening day of the 9th Congress of Samaritan Studies in Prague.