THE STORY OF THE GOLDEN CALF, ISRAELITES, AND FOREIGNERS

Thanks to Sha’ul Bentsion of Sao Paulo, Brazil, whose questions prompted this response from Benny.

Sha’ul notes that the Israelites committed idolatry (in the incident of The Golden Calf), and asks if the Ephraimites ever worshipped a god named Ashima (שִׁימָֽא), or is this a misunderstanding due to the similarity with the word Sheehma.

The people from Babylon made Sukkoth Benoth, those from Kuthah made Nergal, and those from Hamath made Ashima.
[2 Kings 17:31] 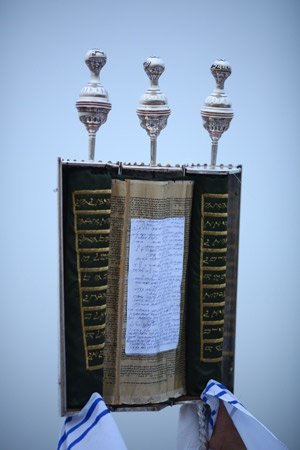 Probably a few thousand, though not all, of those escaping from Egypt sinned as Golden Calf worshippers. Aaron showed weakness in not standing up to these deviants. He was caught off guard for two reasons. Firstly, Moses was absent. Secondly, immediately after they heard the Ten Commandments, some of the leadership helped Aaron to make the Golden Calf. The group included some of the Levites. According to the Israelite Samaritan Version of the Torah, the very first commandment forbids idolatry. Thousands of Levites then helped Moses to regain control.
The story tells us that it is better to live a simple life in worship of the Almighty than to chase after property and wealth, or to live a life of cheating. יהוה, The Almighty, stands against foreign idols.

Concerning the other question, the similarity in pronunciation and spelling of The Name (Shehmaa) and the idol Ashima are coincidental. They have nothing to do with the Israelites of the Kingdom of Ephraim (Israel) and the historical facts. The foreign minority brought by the Assyrians to the former Kingdom of Israel as administrators had idols. They worshiped these idols as Ashima, Nergal, and others.
At the same time, the majority of the Israelites remaining in the Assyrian colony, the territory of the former Kingdom of Israel, held the complete and original Torah of Moses. They believed in the Almighty, and referred to Him as Shehmaa, thus avoiding calling his name in vain. Shehmaa means The Name. We still uphold this rule today.
Be strong in your choice of belief, and do not hesitate to ask questions, so that I may encourage you and others to make the right choices.