ISRAELITE SAMARITAN HISTORY FROM ANCIENT TIMES TO THE PRESENT DAY

In The Land Of Israel With Joshua

In The Land Of Israel With Joshua

After the People of Israel entered the Sacred Land of Israel, Joshua put the Temple of Moses, containing the Tent of the Covenant, on the summit of Mount Gerizim, near the Altar of the Almighty. Thus, he fulfilled the commandment in Deuteronomy 11:29-30 and 27:4,15. At this time, the tribes of Israel performed the ceremony of Blessing and Cursing on Mount Gerizim and Mount Ebal. It is true that the Jewish text of Deuteronomy 27:4 mentions ‘Mount Ebal’ and not ‘Mount Gerizim’ as in the Israelite Samaritan text, but many scholars believe the Jewish text to be biased against the Samaritans.

All the people of Israel worshipped on Mount Gerizim and made offerings at the Temple of Moses until 260 years after the People of Israel entered the Land of Israel.

Then a dispute occurred within the Temple priesthood. Eli the priest, descendant of Itamar ben Aaron, rebelled against the High Priest Uzi ben Bookie, descendant of Pinhas ben Elazar ben Aaron. The latter was the legitimate High Priest according to the Torah commandment [Numbers 25:11-13]. Consequently, Eli was forced to leave Mount Gerizim, and went with his supporters to Shilo. Uzi, fearing a religious rift among the People of Israel, then hid the Temple of Moses in one of the caves on Mount Gerizim. The Temple remains there, undiscovered to this day. (Later, Josephus Flavius indirectly confirmed the tradition in his history Antiquities of the Jews, Book 18). Eli then made a new Tent of the Covenant with new ritual utensils, in Shilo. David later brought this Tent to Jerusalem.

In 722 BCE the Assyrians occupied the Kingdom of Israel and exiled the elite of the population to Assyria, Madai and Babylon. The Assyrians also brought skilled foreign administrators to Samaria, to supervise the taxation of the Israelites and transfer revenue to Assyrian coffers. The foreign minority lived among the Israelite majority in administrative cities, including Shomron, Shechem, Shilo and Gezer. Some of the foreigners subsequently integrated with the Israelite population. Others returned home when the Assyrian Empire weakened.

Surveys made in 1968 and 1980-81 discovered Israelite settlements which continued to develop after the Assyrian occupation.
Back to Contents

In 586 BCE history brought further misfortune. Babylon destroyed the Kingdom of Judah, and exiled most of the southern Israelites to Babylon. Others fled to Egypt, and only a few remained. In the year 538 BCE Persia occupied the territories of the Middle East, and permitted the Israelites to return to their homeland. Not all returned: some remained in Babylon for another 100 years, and later came with Ezra to Jerusalem.

At this time, Israelite leaders in the Persian colonies of Samaria and Judah attempted to coexist peacefully with the exiles returning from Babylon. The two sides even made efforts to allow marriages between their priestly families. However, between 428 and 424 BCE, the faction of Ezra and Nehemiah blocked rapprochement. Then, the two sides developed separately in the north and the south of the country.

For the first time in the Second Temple Period, each side took on a separate national identity. Jews as descendants of the Kingdom of Judah, and Samaritans as descendants of the Kingdom of Samaria. Both held different versions of the Torah. They do so to this day. Later in the Second Temple Period, after the separation of the People of Israel into Samaritans and Jews, the latter added a further 19 books to the original 5 books of Moses to produce their version of the Bible.

The Israelite Samaritans remained loyal to the Pentateuch and consecrated only the five books of Moses: Genesis, Exodus, Leviticus, Numbers and Deuteronomy, written in the ancient Hebrew script that is still used by the Israelite Samaritans today. After the first century CE, in order to emphasize the difference between themselves and the Samaritans, the Jews supplanted the ancient Hebrew script with the Aramaic script.
Back to Contents

Persecution And Resurgence in History

In the fourth and fifth centuries CE, the Israelite Samaritans numbered about 1 500 000, dwelling in several cities and villages in the Holy Land, and from southern Syria to northern Egypt. But due to cruel religious decrees, forced conversion to Islam and Christianity, slaughter and persecution, the population diminished. By March 1919 there were scarcely 141 individuals, living in Nablus and Jaffa. In the 1930s during the British Mandate, the situation improved, numbers began to increase, and there has been steady improvement in all areas of life. Today, this most ancient community has one of the lowest average ages in the world. The Israelite Samaritan Community numbers around 760 souls, all resident in the Holy Land. Around 400 live in Israel, and 360 on Mount Gerizim, Samaria, under Israel‘s Civil Administration and the Palestinian Authority Administration.
Back to Contents

The High Priest is at the head of the Israelite Samaritan community. He is also the head of the Ha’Abta’ee priestly clan, descendants of Aaron, brother of Moses, through his son, Itamar. The three other Samaritan clans date back to the sons of Joseph: the Tsedaka Hatsafari from the Tribe of Manasseh, and the Danfi (Altif and Hassetari or Sassoni) and the Marchivi (Marchiv and Yehoshua) from the Tribe of Ephraim. See this article on Samaritan Households.
Back to Contents

Samaritan life is concentrated in two centres. Around 360 live in the Kiryat Luza neighbourhood on Mount Gerizim, Samaria, above the ancient city of Nablus. Mount Gerizim is our Holy of Holies, our traditional place of worship; Jerusalem was never sacred to us.  Approximately 400 Israelite Samaritans live in the Samaritan neighbourhood established in 1954-55 in Holon, a suburb of Tel Aviv. The community is grateful for the efforts of its late leader, Yefet ben Avraham Tsedaka Hatsafari, of blessed memory, and the great assistance of the second President of the State of Israel, the late Yitzhaq ben Zvi, of blessed memory, as well as the mayors of Holon, the late Haim Kugel, and the late Pinhas Eilon, of blessed memory, who allotted the land for the neighbourhood and helped to obtain the necessary financial assistance.
Back to Contents

The communities are totally integrated with the lifestyles of their neighbours, and the two Israelite Samaritan groups are closely linked. The Holon community also has homes on Mount Gerizim. Samaritans celebrate Major festivals together, the most famous being Pessach (Passover), when we sacrifice the Paschal Lamb and perform the ceremonies passed down the generations.
Back to Contents

The peace process between the Government of Israel and the Palestinian Authority has split the community, in administrative terms, since the end of 1995. Public affairs, particularly the desire to improve the quality of life in both centres, are conducted by committees in Holon for set periods, and in Kiryat Luza in accordance with the instructions of the High Priest. The community has been blessed with an increase in numbers in the last generation, requiring expansion of the residential areas of the two centres and possibly, the planning of a third centre in the near future.

Kiryat Luza sees intense activity: accelerated construction is expanding the neighbourhood in response to the needs of the younger generation.

The Israelite Samaritans have established an International Peace Centre on Mount Gerizim for peace-seekers from all over the world to meet groups in political, social or religious dispute, particularly Palestinians and Israelis. Senior officials on both sides have welcomed the initiative.

The Israelite Samaritans are not officially involved in the politics of the region. By emphasising their ancient heritage and their unique status in the modern world, they wish to be a bridge (gesher leshalom, literally: bridge for peace) between the parties in conflict in the Middle East. They hope that as a result, their modest contribution may help to bring peace. Their neutral position, and their friendship with all parties, enables them to be the only group that enjoys the respect of all sides in the region.
Back to Contents

Education and culture flourish in the Samaritan community. There are cultural activities, as well as summer day camps and exhibitions. In addition, community centres operate primarily in the spring and summer, offering courses and enrichment classes. There are also afternoon classes teaching the Samaritan tradition, from Sundays to Thursdays.

In 1969, the brothers Benyamim and Yefet ben Ratson Tsedaka established AB The Samaritan News. This, the first Samaritan newspaper, is published on a bi-weekly basis in four languages, all appearing in the same edition: ancient Samaritan Hebrew, modern Hebrew, Arabic and English. Subsequently, in 1981, the editors of AB established the AB Institute of Samaritan Studies, named after Yefet ben Avraham Tsedaka, the former head of the Samaritan community in Israel. The institute serves as a focal point for scholars and university students. They receive instruction and guidance at the institute for the research they conduct in Samaritan studies. In addition, three charities in Kiryat Luza help to distribute information about the Samaritans to guests and the Arab neighbours. 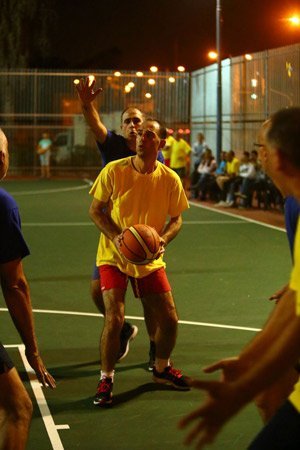 The winter months see extensive activity in the community, copying and preparing the Torah and prayer books for publication. We publish some of them in limited editions.

On Mount Gerizim, an interesting museum run by its owner, Priest Yefet ben Asher, displays items from the Samaritan heritage alongside ancient finds from Mount Gerizim, including coins, lamps and inscriptions. The committee plans an International Peace Center on Mount Gerizim, along with a large museum to display artefacts from our heritage.
Back to Contents

The communities make serious efforts to encourage the younger generation to become involved in Samaritan affairs. Holon operates one basketball team playing in the Israel Basketball Association league. Kiryat Luza re-established a youth club in 1982, with around 100 members. The Club organises sports activities, as well as a basketball team and hiking trips. The club holds courses on Samaritan heritage in the autumn and winter months.

Briefly, this is the ancient history of the People of Israel. The Israelite Samaritans believe, as the Torah says, that at the End of Days a Prophet, like Moses a descendant of Joseph, will appear and reveal the original Temple of Moses. Then peace and the original Israelite tradition will grace the world.
Back to Contents
Benyamim Tsedaka