Close to the Sabbath of the Passover, Moses and Aaron met at Mount Horeb after 60 years’ separation.

Mount Horeb was also, of course, the location where Moses encountered the burning bush:

And appeared to him the angel of Shehmaa in the flame of fire from the midst of the bush. And he looked, and behold the bush was burning with fire, and the bush was not consumed. [Exodus 3:2]

The meeting described in the poem occurs in Exodus 4:

And Shehmaa said to Aahrron, Go meet Mooshe in the desert. And he went and met him at the Mountain of Eloowwem and kissed him. [Exodus 4:27]

The Torah that Moses received at Sinai granted the priesthood to Aaron and his male descendants. Consequently, Aaron became the first High Priest of the Israelites. Like his younger brother Moses, Aaron did not enter Canaan with the Israelites. He died before the Israelites crossed the Jordan. Dates assigned to Aaron’s life vary from 1600-1200 BCE. 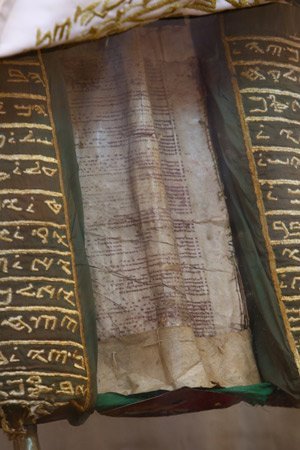 Listen to my words

The Almighty supports it

My words will inform you what swiftly passed

Between the the Great Prophet and Man

When Aaron went out to meet him

With joy and greatness

He raised eyes from afar

And his heart could not stand still

And the Angel of God said to him

In an honorable way:

“Aaron, He is your brother Moses

Who promoted and honoured you

Go forth and greet him

And kiss his hand.”

And bowed down before him

Greetings the Messenger of the Almighty

The Servant of the Almighty

Greetings the Man of the Almighty

Who raised his hand.

I never expected to see your face

And behold! The Almighty lets us meet!

Today is between you and me

In happiness and kindness

Today is the Will  established

The meeting of Aaron and Brother

The meeting of kind with kind

The meeting of Sun and Moon

The meeting of Teacher with Teacher.”

And honoured and praised, saying:

“The World Creator should bow to the Almighty.”

And the Angels assented and said:

“The Almighty is King and the World is Witness.”