THE ISRAELITE SAMARITAN VERSION OF THE TORAH IS AVAILABLE IN ENGLISH

The Israelite Samaritan Version of The Torah

April 2013 saw a special publishing event, when Eerdmans published the first English translation of the Israelite Samaritan Version of the Torah alongside the Masoretic version, also in English. As a result, and for the first time, readers can see both versions laid out side by side for ease of comparison. Benyamim Tsedaka translated, wrote and also edited this version, helped by co-editor Sharon J Sullivan. 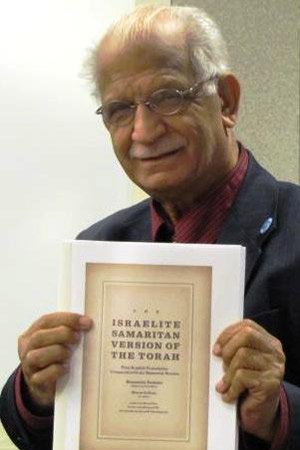 In more than 500 pages the book presents the Samaritan Torah in English translation. Alongside, we see the traditional Jewish (Masoretic) version, also in English. Conveniently, the translations appear in parallel columns, and in addition, notes in the text highlight the 3000 significant differences between the two versions. Also, the left margin contains Benyamim’s explanations for the most prominent differences, based on the Israelite Samaritan tradition. All names in the Torah are given in the original Hebrew pronunciation, as well as being listed in an appendix. Two further appendices show how close the Samaritan Pentateuch is to the Translation of the Seventy, and to some of the Dead Sea Scrolls.

On 27 November 2012, following an introduction by Professor Charlesworth, Benyamim Tsedaka led a seminar on the importance of the Israelite Samaritan Version of the Pentateuch. Eminent scholars and advanced students of Princeton University Theological Research Department attended, as well as other interested individuals. Princeton was an especially appropriate venue, having a strong reputation in Biblical Research. At this event the first pre-publication copies of Benyamim’s long-awaited book were presented at last, to the delight of Benyamim and Professor Charlesworth.
Back to Contents

Benny also offers LECTURES around the material in the book