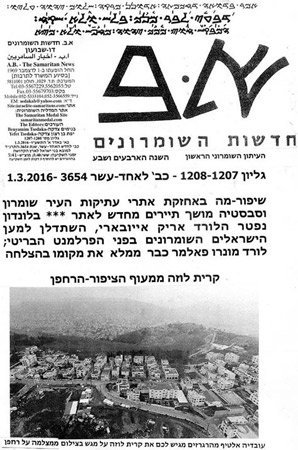 Photo: Kiriat Luza, Samaria, from the air by Ovadia Alteef

Samaritans mourn the passing of Eric Reginald Lubbock, 4th Baron Avebury, on 14 February 2016, at the age of 87. Lord Avebury died peacefully at his home in Camberwell, South London. Our thoughts and prayers are with his wife, Lindsay, and his family. See this POST for more on Lord Avebury.

Lord Avebury is held in very high regard by Israelite Samaritans, who appreciate the support he gave them over the years. He was a conduit for Samaritan expression, lobbying the British government on behalf of the community from 1995 until his death. Lord Monroe Palmer is taking over the role so ably fulfilled by Lord Avebury.

Improvements in the maintenance of the site of the ancient city of Samaria, Herod’s Sebaste, mean that the site is attracting tourists once more. (Herod set about rebuilding and enlarging the city of Samaria in 27 BCE, recognising its value as a refuge for himself: at one day’s march from Jerusalem, it might be a convenient bolt-hole for a ruler who made as many enemies as the ruthless Herod. The city was also a strongpoint for control of the surrounding country. It was encircled by a wall two miles long, and described by Josephus as “a first-class fortress”. Over the remains of the palace of Omri and Ahab a large temple was built. Herod’s city was a Gentile one, dedicated to Sebaste, the Greek equivalent of Augustus.)

And Now the Rabbis? Where? by Gad Joseph of the Samaritan community in Brazil