3 August 2015: the Samaritan Medal for Peace and Humanitarian Achievements was awarded to High Priest Abed El, son of High Priest Asher, and to the Prime Minister of the Palestinian Authority, Dr Rami Hamdallah.

The head of the Prime Minister’s office arrived early, the kind and smiling Mr Bashar Jumaya. He shook hands warmly, with the customary hug. We sipped excellent coffee from tiny cups, then the Prime Minister arrived. He hugged the High Priest, and acknowledged each of us with a generous handshake, welcoming us all. 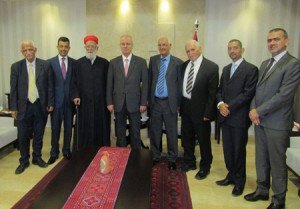 Palestinian Prime Minister, Dr Rami Hamdallah has a very positive history regarding his relations with the Israelite Samaritans on Mount Gerizim. As President of the An-Najah National University in Nablus he has promoted academic achievements. A few years ago the writer brought two Samaritan researchers to a meeting with Dr Hamdallah. One was Dr Hasiv Shahada from Helsinki University, the other, Eli Veted from Beit Berl College in Israel. They were pleased to support the writer’s request that the University President reinforce the study of Samaritan-related topics.

Dr Hamdallah enthusiastically agreed to the request, eased the admission criteria to An-Najah National University for students from the Mount Gerizim Community. He also opened the university cultural centre to exhibitions about the Samaritans. This was done in partnership with The Samaritan Narrative Association, led by Yakov, son of High Priest Abed El, and attracted a lot of interest among the Palestinian students.

At the meeting today High Priest Abed El and Community Secretary Itzhak Altif detailed their requests to arrange a respectable annual budget from the Palestinian Government for the Samaritans on Mount Gerizim. The Secretary convincingly presented the Community’s financial situation, desperate to the point of having to limit the supply of vital services. He then filed a budget request to Prime Minister Dr Rami Hamdallah.

In answer to the requests and to our questions, Prime Minister Dr Rami Hamdallah emphasised the long-standing good relations with the Samaritans, and added that there is no reason why that relationship should not continue. He responded positively to the request for an organised budget, and confirmed that he will ask the relevant local Palestinian Government authority to take care of it. He asked about the connections between the Samaritan Community in Holon and the Community in Mount Gerizim, and was happy to hear that the connection is going well. 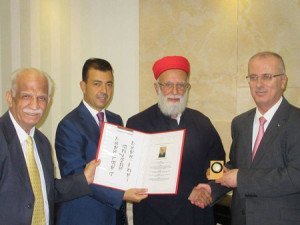 High Priest Abed El was honoured to present the Samaritan Medal to the Palestian Prime Minister Dr Rami Hamdallah, who maintains good relations with all political factors in the region, works to promote peace, and has successfully promoted education among Israelite Samaritan students.

High Priest Abed El also presented a Samaritan Mezuzah to the Prime Minister. Dr Hamdallah instructed the head of his office, Bashar Jumaya, a native of Nablus, to frame the Mezuzah and hang it on the wall of his office to bring a blessing.

The meeting was conducted in a good-natured and friendly manner, with Dr Rami Hamdallah showing friendship to his Samaritan guests. He wished the High Priest Abed El good health, and said goodbye to us all after accompanying us to the lift which took us from his office down to the main entrance.

We left the meeting with a feeling of joy, to face the blistering heat outside his office. We hurried to our air-conditioned cars and returned to Mount Gerizim, happily ticking off another successful meeting with such a pleasant person as the Palestinian Prime Minister, Dr Rami Hamdallah.