Reuven Rivlin, President Elect of Israel Expresses his Affection for the Israelite Samaritans 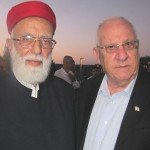 As a member of the Knesset (the Israeli parliament) Mr Rivlin has assisted Samaritan development projects and has fostered warm relations with the Samaritans. In the ceremony he stated that after taking office as the 10th President of Israel, he intends to devote most of his 7-year term of office towards achieving peace in the region, and to focus on internal issues in Israeli society. In particular: to open the hearts of different religious groups in Israel, thereby bringing them closer together.

Responding to this statement, Mr Rivlin’s Samaritan hosts said that if he follows this course the Israelite Samaritans will happily compare him with the Second President of Israel, Yitzhaq Ben-Zvi, who was like a father and a patron to them, and who helped them to establish their residential neighbourhood and the first Samaritan synagogue in Holon.

Mr Rivlin said that he has a warm place in his heart for the Israelite Samaritans, since he became close friends with his host, Israelite Samaritan Yefet ben Ratson Tsedaka, an active figure in the Likud Party. “This fact attracted me to this noble community”, said Mr Rivlin. 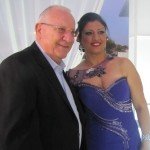