The Tomb of Elazar is a Site of Political Wrangling. It is located in the village of Awarta, Samaria, controlled by the Palestinian Authority.

As promised by the newspaper AB Samaritan News, two or three times a year we monitor the condition of the Tomb of Elazar, the first High Priest of the People of Israel in the Land of Israel.

While inspecting on Wednesday 5 February, 2014, I found the following: 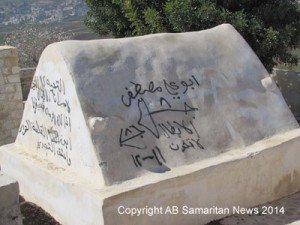 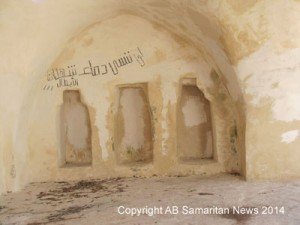 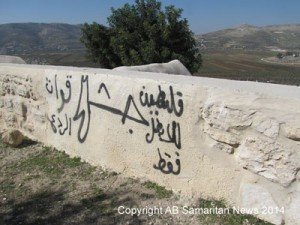 The damage to the site can be repaired by whitewashing the monument and the walls once or twice a year, at a cost of 1,500 to 2,000 Israeli Shekels. However, this “price tag” graffiti vandalism shows that Palestinians and Jews use the cover of darkness and the remoteness of the site to carry out their desecration.

Tours and visits by Israeli worshippers to the tomb of Elazar are fully coordinated with the Palestinian Authority and the village council of Awarta. 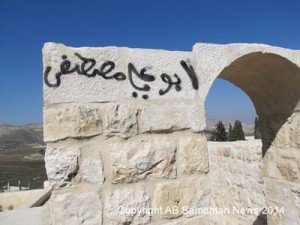 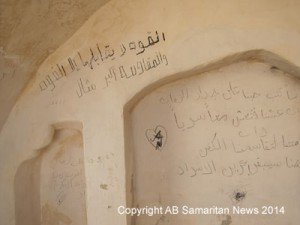 AB Samaritan News would like to emphasize that two years ago the Israelite Samaritans themselves restored this Holy Place, investing a total of 110,000 Israeli Shekels from donations. The Israelite Samaritans visit the tomb several times during the spring and summer, when they pray to the memory of Elazar the High Priest.

The site entrance is open to any visitor. There is no iron gate or barrier.

AB Samaritan News calls on the Palestinian police and security forces to conduct frequent security patrols at the site to prevent further desecration.

AB Samaritan News calls on the Palestinian Governor of the Nablus area to order the repair of the damage  at the Tomb of Elazar.

The photos show: Steps graffiti on the tomb, at the entrance, and on the wall.

The Tomb of Elazar