I Return to Mount Gerizim, the Mountain of Blessings

I returned last week to Mount Gerizim, the home and eternal dwelling place of the Almighty,  after three months’ absence: one month of holiday in Holon and two months of lecturing in Europe and the U.S. I returned safely to the Promised Land on Thursday, 26 December 2013. 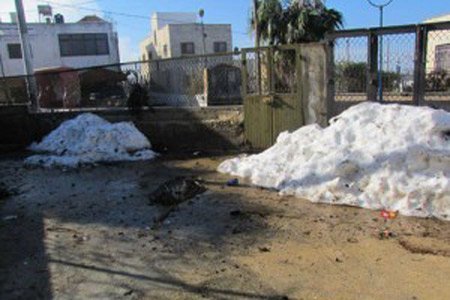 On the first day of 2014, I awoke on a sunny morning in my warm home on Mount Gerizim. I went into the courtyard of the house and saw the results of the snowstorm which had struck Mount Gerizim and the Israelite Samaritan neighborhood of Kiriat Luza harder than anywhere in the country.

Trees around the yard were broken by the storm, limbs snapped off by the force of the wind and the weight of the snow. Broken-off  branches lay over the yard and the stairs to the house. Two piles of unmelted snow remained in the yard, a fortnight after the snowfall. I smiled to myself: here was weather more appropriate to the midwest of the USA, where I had recently been.

Two workers helped to clear up, collecting branches broken off trees and roses, and gently shaking the snow off the plants. I asked them to prune the lemon tree, ready for the new spring growth next month.

Shortly afterwards I visited some of my many friends and relatives on the mountain. They told me excitedly that the blizzard on the Sabbath two weeks ago had been a hard one, cutting off electricity and water for 48 hours. Israelis and Palestinians had come to their aid. The Palestinian Electric Company restored electrical power, and the Council of Shomron Settlements sent snowploughs and food.

Isaac Altif, secretary of the Mount Gerizim community told me about the difficulties they had faced. On the first day he could do nothing, because it was Saturday. “The  Council of Settlements in Samaria sent us food parcels, containing oil, milk, bread, honey, flour, rice and other essentials. We distributed the packages to every Samaritan home on Mount Gerizim, and to the few neighbouring Arab families. The Samaritans are very grateful for the help” said Isaac.

I talked with friends about the possibility of further storms in mid-January or February, and then returned home. The workers were still clearing my yard. Anxieties at the thought of  more snow were dispelled by the warm rays of the sun.

It seems that everything returns to normal.