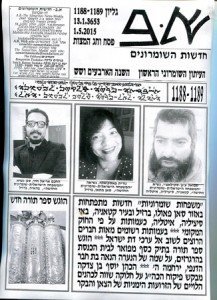 New Israelite Samaritan families are now established in the region of Sao Paulo, Brazil and in Catania, Sicily in Italy. They are recognised as charities in local law. Hundreds of members are registered in the communities, all wanting to return to the values of Ancient Israel.

A new Torah scroll in a beautiful silver case was offered to the synagogue on Mount Gerizim, dedicated to the memory of Hannah d. Chaver the Dinfi, may her spirit receive mercy from the Almighty.

The Priest Yussef b. Tsedaka asks the High Priest to inspect the equitable distribution to the priestly families of the right forelegs of slaughtered sheep, cattle and goats.

Articles in the English Section: Ilan Bergman on The Uniqueness of Mount Gerizim, and  Professor James Hamilton Charlesworth: Is this is the Original Text of Duetoronomy 27:4-6?

A.B. – The Samaritan News Bi-Weekly Magazine, was first published in December 1969 in four languages: Ancient Hebrew, Modern Hebrew, Arabic and English. The founders and editors are the brothers Benyamim and Yefet Tsedaka.