In this issue: The National Israelite Samaritan Garden 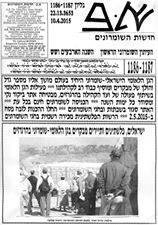 The National Israelite Samaritan garden – the only one in the world – on the summit of Mount Gerizim attracts praise and a growing number of visitors to our community. Its activity is coordinated by the Mount Gerizim Israelite Samaritan committee, which organises the entire year of the site and ensures that it is clean for visitors. Admission is free of charge at all times. The site is closed on the Sabbath and the Samaritan festivals.

Preparations for the Passover Sacrifice on 2 May, 2015 have begun. The Palestinian Authority gives official recognition to the festivals of the Samaritans.

In the photograph: Israelis, Palestinians and tourists visiting the Samaritan National Garden on Mount Gerizim