In this issue: elections to the 20th Israel parliament 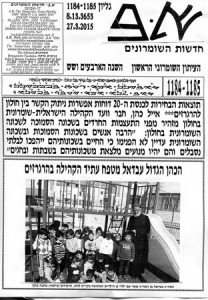 The results of the elections to the 20th Israel parliament delay the possibility of cutting the link between Holon and Mount Gerizim. Eyal Cohen, a member of the Israelite-Samaritans Committee in Holon warns of the threat to the Samaritan neighbourhood in Holon posed by the increasingly powerful extreme religious Jews in the nearby Neveh Arazim neighbourhood:

“Many of those in nearby neighbourhoods, and in the Samaritan neighbourhood are unaware of the fact that soon their life will be unbearable, and they will not be allowed to go out of their neighbourhoods on Sabbats and festivals”.

A.B. – The Samaritan News Bi-Weekly magazine is in its 46th year. It was founded in December 1969 by brothers Benyamim Tsedaka and Yefet b. Ratson Tsedaka, who also edit the magazine.