The 5th IFCM Multicultural and Ethnic Choral Conference
The MEMBERS of The Israelite Samaritan Choir have returned home after a successful visit to GIRONA, Spain, where the Choir took part in the “Conference of Mediterranean Voices” festival of choral music from 28 July – 2 August 2013. 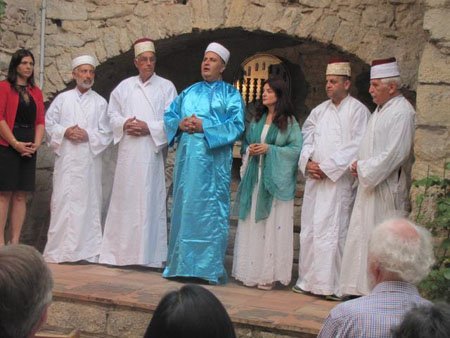 History of the Choir
Since the Israelite Samaritan Choir first performed in the summer of 1980, it has been attracting the attention of those who love ancient choral music. The Choir has performed in Israel, Europe, Asia and North America. The music festival in Girona, Catalonia, is the Choir’s first performance in Spain. The complete Choir comprises twenty-four singers, but the number of singers is adjusted to the financial budget of each festival. This time the budget was only sufficient for seven singers.

The Israelite Samaritan Choir sings what is perhaps the most ancient music of the civilised world: the choral music that was sung by Moses and the Sons of Israel when reading the Law, and when singing the hymns to their original melodies. The Choir performs the original Song of the Sea (Exodus Chapter 15), verses from the Torah with their ancient melodies, and hymns from the 14th century containing wedding songs, wine songs and songs praising Moses. The Choir concludes each performance with its anthem, written by conductor Benyamim Tsedaka, expressing praise and admiration for Mount Gerizim, the sole sacred place for the Israelite Samaritans.

A Creditable Performance on a Modest Budget

Due to Spain’s economic difficulties, and despite support from the European Union, the Choir was limited to seven singers. All Choirs see participation in such events as an opportunity to spread awareness of their culture, and to represent the communities they come from. Our Spanish hosts welcomed the Israelite Samaritan Choir, and provided the singers with a comfortable, convenient hotel in Girona, as well as covering the cost of their meals, prepared by the spouses of the singers.

As with most choirs, members of the Israelite Samaritan Choir have to earn a living, and their participation in festivals occurs during their annual vacation. They receive some modest fees to cover expenses, but ultimately, singers participate for the pleasure of singing and representing their community. Their reward is the reaction of the audience: excited applause and tears of emotion from a crowd grateful to hear the music of the ancient civilised world. We should add that the tours are a great opportunity to see the world and meet members of other choirs.

Growing European Interest,
Our appearances at Girona proved successful. The singers, wearing white garments and distinctive festive headgear, excited interest even before they started to sing. The crowd, swept along by their singing, followed the different musical styles and enthusiastically applauded the ancient songs. For the song Praise to Moses the applause was particularly long. At the end of each performance the singers bowed repeatedly to an enthusiastic audience.

After the long journey home, we can feel satisfaction with the performance of the current ensemble. We understand the disappointment of those who were unable to take part this time, due to the limited budget. Whatever the number of singers, the organisation of such a journey entails a great deal of work and negotiation over every detail, in order to ensure a creditable performance on stage.

Representatives of Israel and Mount Gerizim
The Israelite Samaritan Choir was the only one representing Israel and Mount Gerizim. In the Conference of Mediterranean Voices our Choir performed with choirs from Spain, Serbia, Lebanon, Tunisia, Sicily, Morocco, Greece, Sardinia and Crete. One-half of the choirs came from different regions of Spain.

We met the organiser of the European festivals, Mr. Francesco Leonardino; and the organisers of the Girona festival, Mr. Martin Pree and Mr. Dolf Rabush. They came to our concerts, where our performances made a great impression on them. They expressed a wish to see us on other European stages in the near future.