In this issue: second synagogue to be built. 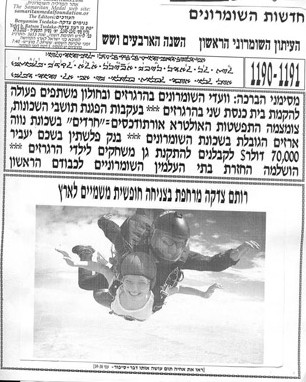 The Israelite Samaritan Committees in Mount Gerizim and Holon have agreed to cooperate to build a second synagogue on Mount Gerizim.

Following the demonstration by neighbourhood residents, the expansion of ultra-orthodox Jews has been restricted to the Neveh Arazim neighbourhood, close to the Samaritan neighbourhood in Holon.

The Bank of Palestine in Nablus has donated $70 000 towards the cost of building a new games area for youngsters on Mount Gerizim.

Work on the Samaritan cemeteries in Mount Gerizim and Tel Aviv is now complete, restoring a dignified tranquility to both locations.

A.B. The Samaritan News was first published in 1969

The magazine is bi-weekly, and is published in four languages: Ancient Hebrew, Modern Hebrew, Arabic and English

The Editors are the brothers Benyamim and Yefet Tsedaka